Halfway between Canada and Mexico, the Little Rock region offers access to 100 million people within a 550-mile radius. Air, rail, water, and interstates give the region an ideal intermodal network near the geographic and population centers of the United States.

Union Pacific Railroad (UP), Burlington Northern Santa Fe (BNSF) and Genesee Wyoming serve the Little Rock area with freight rail services. The Port of Little Rock has its own shortline railroad which connects to the UP and BNSF, two Class I railroads. Greenfield sites and industrial buildings are available for lease or purchase at the port.

In addition, Amtrak services the Little Rock area with passenger rail service. Little Rock Union Station, which opened in 1921, is the train station that services Amtrak.

Adjacent to I-440, connecting to I-30 and I-40, the Port of Little Rock is on the 448-mile McClellan-Kerr Arkansas River Navigation System, which runs from the Mississippi River northwest to 15 miles east of Tulsa. Welspun, LM Windpower, Lexicon, Skippy Peanut Butter, Ring Container Technologies, Ryerson, and Georg Fischer Harvel are a few of the industries that call the Port of Little Rock home.

This unique intermodal transportation center features a 3,000 acre industrial park, two full-service river terminals, its own shortline railroad that connects to two Class 1 railroads, one Slackwater Harbor (soon to be two), and is home to Foreign Trade Zone 14.

Greenfield sites and industrial buildings are available for lease or purchase at the Port of Little Rock with rail, water, and road access.

Serving 2.2 million passengers annually with eight airlines, the Bill and Hillary Clinton National Airport has 57 daily departures to 14 different cities (see list below). From there, you can reach major cities across the globe. The airport is home to manufacturer Dassault Falcon Jet, their largest operations in the world. In addition, two FBO's are located at the airport: TacAir and Lynx. The airport is designated as a U.S. Customs Point of Entry.

Ready to relocate or expand? 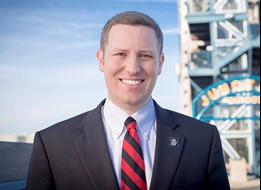 The Little Rock region is home to many large employers in a variety of industries. Government, healthcare, manufacturing/distribution and banking/finance are the top employers. Little Rock has seen a growth in FinTech and tech-related companies.

If you have questions about how the chamber can help your business or how you can get involved in growing our regional economy, contact the Economic Development Team.